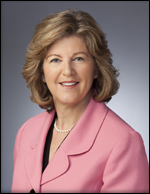 Susan V.R. Billington, Q.C. joined the UCalgary Faculty of Law in August 2019 as an Associate Professor and Executive Director of Student Legal Assistance. Student Legal Assistance is the pro bono legal clinic at the Faculty of Law that provides legal information and agency representation in the Provincial Court of Alberta to low income clients in the areas of criminal, family and civil law. Legal services are delivered by Faculty of Law student caseworkers. Susan remains on the management team at Billington Barristers.

Susan is an experienced mediator and is a member of the International Association of Facilitators. Susan was appointed Queen’s Counsel in 2008 and was awarded a Woman in Law Leadership Award in 2012. Most recently, Susan was awarded with a Distinguished Service Award for service to the legal profession from the Canadian Bar Association and the Law Society of Alberta.

Susan graduated from the Faculty of Law at University of Calgary in 1985 and was admitted to the Alberta Bar in 1986. She practiced law both in litigation and as a solicitor before joining the Law Society of Alberta in 1994. Susan practiced at the Law Society for 20 years and held the positions of Complaints Resolution Officer, Complaints Manager and Policy and Program Counsel. She supported the Law Society’s Board of Directors (Benchers) in the development of policy and program initiatives in a wide variety of areas of law and practice including Western Law Societies Conveyancing Project (Protocol), the Continuing Professional Development program, many equality initiatives including the Equity Ombudsperson, the Justicia Project and Aboriginal Summer Student program, the Alternate Delivery of Legal Services Project and the Retention and Re-engagement Task Force. Susan also fostered the development of the pro bono legal clinics in Edmonton, Red Deer, Lethbridge and Grande Prairie. In 2007, Susan was seconded for 2 years to be the founding Executive Director of Pro Bono Law Alberta, an access to justice initiative celebrating the 100th anniversary legacy project of the Law Society.

Susan served as a Municipal Councillor for the Kananaskis Improvement District from 2012 to 2017. She also served as an Appeal Panel member for the Real Estate Council of Alberta from 2012 to 2018. Currently, Susan sits on the Board of Governors of SAIT appointed in 2020 for a three year term.